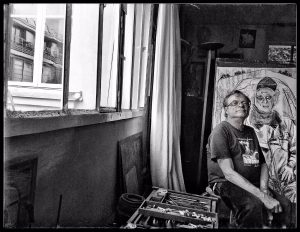 A Painter and artist of Canadian origin, David Kennedy lives in Paris. He was born the first of five siblings and grew up in Toronto with an engineer father and a stay-at-home mother. He studied economics and computer science. He becomes aware of painting and fine arts through the museums that he fervently visits. In 1986 he moves to Paris, away from his too involved family.

At forty-something, he is very interested in Fine Arts and starts taking painting classes, and then interns at the George Pompidou Museum, at the contract monitoring department for exhibitions. Both experiences act as a catalyst: David Kennedy begins his own career as painter and artist. Significant encounters come to play a big part in his initiation process. He crosses paths with painters Denis Prieur and Thierry Cauwet who open the doors of their studios to him. In addition to painting, David Kennedy began to learn about engraving by attending the Carnavalet Museum engraving workshop, the Mireille Baltar workshop on rue des Arquebusiers, the Yarosclav Gorbanevsky workshop, and for the past 2 years the Bo Halbirk workshop. This path will help him acquire an artist’s eye and a technique which keeps evolving day after day.

Each of the paintings by painter and artist David Kennedy is an encounter with a theme that he approaches with passion and then interprets in his paintings, drawings, portraits, and landscapes. Painting mythology, religious art, Renaissance, Flemish tapestries, and in particular “David and Bathsheba” are among his influences. His creative momentum is the result of intense research. Besides other artists’ paintings, cinema, literature, and art exhibits nourish his imagination. His passion pushes him to carefully explore the methods used by other artists. So, to reproduce the light mastery of Rembrandt’s, David Kennedy creates a series of photographs in a studio with performers dressed in period costumes.

In the same vein, a stay in Assisi and Roberto Rossellini’s film “The Flowers of St. Francis” inspired painter and artist David Kennedy to create 21 paintings dedicated to the life of this saint.

Like many painters and artists, David Kennedy is driven by the desire to transmit and share his passion for art in all its forms. Curious of other civilizations, he nurtures friendly ties with a few Chinese citizens very eager to learn more about Western culture. He is still learning their language to this day. These exchanges represent many opportunities to share the underlying Christian concepts in the life of Saint-Francis of Assisi. His many trips, meeting opportunities with many artists and gallery owners have sharpened his vision of the art market. Specifically, David Kennedy does not overlook the major role finances play. He is sensitive to the financial challenges his artist friends are facing. It is extremely difficult for them to secure gallery exhibitions, or to earn living from it. As a true entrepreneur, David Kennedy is currently considering establishing a space dedicated to creation and to lesser known artists.